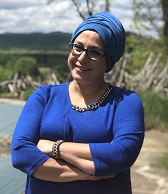 Feyza Burak-Adli is a postdoctoral fellow in the Department of Anthropology at Northwestern University. She received her Ph.D. in cultural anthropology from Boston University in 2020 with the dissertation titled “Trajectories of Modern Sufism: An Ethnohistorical Study of the Rifai Order and Social Change in Turkey.” She holds a joint MA in Anthropology and Women, Gender and Sexuality Studies from Brandeis University, and an MA in English from Wake Forest University. She worked as a lecturer in the Department of Women, Gender, and Sexuality Studies at the University of Virginia between 2016- 2020.

Her broader research interests include the anthropology of Islam and Sufism; ethics and subjectivity; gender and sexuality; Turkish Studies. Drawing on her ethnographic research in Turkey since 2011 with the upper-middle-class Turkish Sufis of the Rifai order, her current book project examines the trajectories of modern Sufism in Turkey since the late nineteenth century. Through an ethnohistorical survey of the Rifaiyye, she studies how Islamic traditions adopt new forms, practices, and institutions in articulation with ongoing socio-political transformations. She has developed the concept of the “ethical plurality” that refers to the historically specific sources of piety that Sufis have established. Going beyond the Islamic sacred texts, this wide range of sources blur the religious and secular boundaries as they entangle with political discourses, social projects, and moral registers. Furthermore, Burak-Adli draws attention to the recent revitalization of Sufism in Turkey among the cosmopolitan middle class with secular cultural orientation. As such, she points out to the emergence of a new hybrid middle class habituating Islamic sensibilities within their secular socialities. Finally, highlighting the discursive varieties of Islamic traditions in Turkey, she explores the alternative modalities of piety that advocate for more gender-progressive Islamic norms.