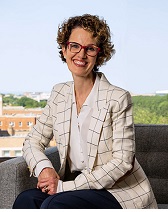 Annelise Riles is the Executive Director of the Roberta Buffett Institute for Global Studies at Northwestern University, enhancing Northwestern’s reputation for cutting-edge, interdisciplinary programs and research on globally relevant topics. Riles is also the Associate Provost for Global Affairs and a professor of law and anthropology.

Her scholarship spans a wide range of substantive areas including human rights, managing and accommodating cultural differences, and the regulation of the global financial markets.

She has conducted legal and anthropological research in China, Japan, and the Pacific and speaks Chinese, Japanese, French, and Fijian. She has published on a wide variety of topics, including comparative law, conflict of laws, financial regulation, and central banking. Her first book, The Network Inside Out, won the American Society of International Law's Certificate of Merit for 2000-2002.

Riles is also the founder and director of Meridian 180, a multilingual forum for transformative leadership. Its global membership of 800+ thought leaders in academia, government, and business work together to generate ideas and guidance on the most important problems of our time, including global financial governance, environmental governance, and data governance.

She has taught at the London School of Economics, University of Tokyo, Yale University among others. Riles is a former professor of anthropology and far east legal studies at Cornell University. During her time at Cornell, she received the Annelise Maier Award for lifetime achievement across the social sciences and humanities from the German government and Humboldt Foundation.