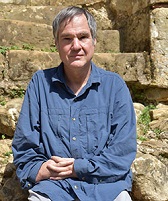 Matthew Johnson works on the archaeology of the British Isles in its Northern Atlantic and European context.  He has written six books on a range of themes, including castles, traditional houses, landscape, and an archaeology of capitalism.  His best known book is Archaeological Theory:  An Introduction:  the revised third edition appeared in 2019. He has also written more widely on interdisciplinary and interpretive approaches, understanding medieval and historical archaeology, and archaeology in its cultural context.

He most recently worked ‘in the field’ at Bodiam Castle and nearby houses and landscapes in southeastern England.  Bodiam is an iconic site, termed a ‘fairytale castle’ by visitors.  It has been a classic study in debates over society and culture in the later Middle Ages.  The collaborative Anglo-American project explored the castle and its surroundings as a living landscape of people of different social classes and identities.  Places like Bodiam are best understood as a series of scales, ranging from the action of washing hands in the chapel piscina through to their setting within global and postcolonial networks.

He has taught a range of topics including:

Prof Johnson was born in Austin, Texas, and is a dual US/British citizen.  He has held visiting fellowships and positions at UC-Berkeley, Heidelberg University, UCLA, Flinders University, University of Cambridge, and the University of Pennsylvania.  After a PhD at Cambridge and posts at Sheffield, Durham and Southampton, he returned across the Atlantic in 2011 to become Professor and sometime Chair of Anthropology at Northwestern University. He was selected as a Guggenheim Fellow in 2019.

He is currently working on a book on the archaeology of the English in the Atlantic world in the second millennium CE.  He traces material landscapes and identities from the English Middle Ages, through the feudal settlements of Wales, Scotland and Ireland, to the plantations and colonies of New England, Virginia and the Caribbean.  His aim is to explore the landscapes, buildings and objects that people made and used, and how these were bound up with the changing identities of the English and their neighbors over the very long term.

Here are links to Prof Johnson’s CV, his profile on Northwestern Scholars, his ResearchGate site, his work on neo-Romantic reconstruction artist Alan Sorrell, and an interview on archaeology and medieval castles.

1996    An Archaeology of Capitalism.  Oxford, Blackwell.

2002    Behind the Castle Gate:  From Medieval to Renaissance.  London, Routledge.  One of three nominated for the biennial 2002 Archaeological Book Prize.

2006    Ideas of Landscape.  Oxford, Blackwell.  Selected by Margaret Drabble as one of her Books of the Year.

2017 (ed.) Lived Experience in the Later Middle Ages:  Studies of Bodiam and Other Elite Sites in South-East England.  St Andrews, Highfield Press; full text is also available at ResearchGate, and on the project website at http://sites.northwestern.edu/medieval-buildings/.

2014     (with Sara Perry) Reconstruction art and disciplinary practice: Alan Sorrell and the negotiation of the archaeological record.  Antiquaries Journal 94, 1-30.